The iRobot Roomba 770 Review: The Vacuum Cleaner That Cleans by Itself

If you ask anyone who is in charge with cleaning their home what the best vacuum cleaner is, they’ll automatically respond that it’s the vacuum that can do the job on its own. A decade ago, it was a good joke. Nowadays, it’s not a joke, or something you only see in science fiction movies, because there are vacuum cleaners that do the job on their own.

When they first came out, they weren’t all that effective or efficient, but technology is constantly progressing and that means that these robotic vacuums are now just as good as standard vacuums. In fact, you could say that they’re better because they can do the work even when you’re not home, which is precisely why I think the iRobot Roomba 770 is the best vacuum cleaner on the market.

A Look at What the iRobot Roomba 770 Can Do 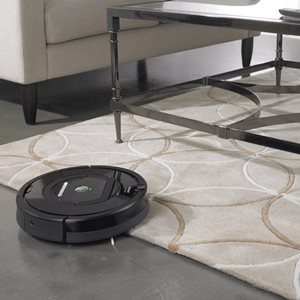 While the most attractive aspect of the iRobot Roomba 770 is that it can clean by itself, that’s not all it has to recommend it. The unit has a new cleaning head that allows it to pick up the smallest particles of dust and dirt, as well as ensuring it can handle pet hair and larger debris. The manufacturer claims that it is capable of picking up 98% of the dirt, pet hair, and dust in your home, which is impressive to say the least.

This vacuum also has a dual HEPA filtration system to clean the air and ensure allergens, dust and other microscopic particulates aren’t evacuated in the airflow. In other words, you’ll have lovely, fresh air after the iRobot Roomba has done its work.

Loaded with the most modern technology, the iRobot Roomba has the capacity to locate the dirtiest areas in your home, allowing it to perform even more thorough cleaning than usual. So, it will make multiple passes until there’s no dirt left behind.

This robotic vacuum also includes what’s known as Virtual Walls, which is a system that allows you to set where the iRobot Roomba 770 can clean. For example, if you don’t want it cleaning in the kitchen, then you can limit it to clean in the other rooms on the same floor and stop it accessing the kitchen. Of course, you can program the inaccessible area to be smaller.

Another nice feature the Roomba has is that it alerts you as soon as the dust bin is full so you never have to guess when it needs emptying. This makes life really easy, especially when you consider that the Roomba does the cleaning on its own. In fact, you can even program it to do the cleaning whenever you want, thanks to its on-board scheduling system.

You can even set it to get the cleaning done while you’re out, saving you time and ensuring you have a spotlessly clean house to come home to. This iRobot also features iAdapt Responsive Cleaning Technology, which is an advanced software and sensor system that lets the unit do a more thorough cleaning job as well as enabling it to access a larger part of the room. Thanks to this technology, the Roomba can recognize and avoid obstacles as well as being able to tell the difference between a hard barrier like a wall and a soft one that it can get through like the skirt of a couch. It can also avoid any drop-offs like with stairs and can self-adjust for cleaning hardwood floors, carpeting and linoleum.

Is the iRobot Roomba 770 Really That Good?

The fact is that the iRobot Roomba 770 really is that good. I’ll be honest that the first thing that drew me to this vacuum cleaner was that it was supposed to be able to do the cleaning by itself. I was a bit skeptical at first, especially since I knew people who’d had poor experiences with these types of vacuums in the past. However, the iRobot completely changed my view of robotic vacuums.

I was honestly not expecting it to be able to do as much as it can do on its own. This really is a set-and-forget cleaning assistant. All I had to do was set up the schedule as I saw fit and let it loose. Okay, I’ll be truthful and admit that I watched it do its job the first few times out of curiosity and then fascination.

The Roomba pretty much zips through a room like you’d expect something to do on a science fiction show. It zoomed back and forth, spotting really grimy areas—not that there are a lot of those in my house—and really worked over them to clean up even the last spot of dirt.

I was convinced, though, that it wouldn’t be able to handle the pet hair. Let me explain. I have a dog that sheds. And I mean he sheds a lot. So, I basically have to vacuum every day to even put a dent in all the hair he leaves behind. It also doesn’t help that he’s white, which makes the hair even more visible.

And I can’t tell you how many vacuums have simply given up working because they couldn’t handle the hair. So, I thought the Roomba would fall into the same category. However, much to my surprise, the Roomba managed to pick up more in one go than I ever did in a whole week of daily vacuuming. I no longer have to worry about my clothes being covered in pet hair. And the fact that it does the cleaning while I’m at work makes things even sweeter because I come home to lovely clean floors.

The only thing I’m worried about is that my dog will eventually try to eat it. The first time it started working, he sniffed it curiously, and then decided it was too strange and turned tail and ran. Once he’d picked up his courage a bit, he started chasing after it. So, it’s basically comedy time whenever the Roomba is doing its work.

Another thing I have a problem with is that it doesn’t have any of the special attachments I can use to clean the furniture, drapes and other surfaces. I have to use my other vac for that. However, I have to admit that it’s a small price to pay for getting most of the vacuuming done on auto-pilot.

So, overall, I think the iRobot Roomba 770 is the best vacuum cleaner on the market, at least for my needs. It handles the cleaning very well—comparable to the Dyson DC65—and, more importantly, it does it on its own. I haven’t had to vacuum the floors since I bought it, and I can safely say that it’s not something I miss doing.