A Buyer’s Guide to Choosing the Best Safety Razor

I like to think of safety razors as the middle ground of shaving tools. On one end of the spectrum, you have the primitive, quite often dangerous ﻿﻿straight razors﻿﻿, which are used by lumberjacks and hipsters and soldiers serving in Vietnam. On the opposite end, you'll find the electric razor - the chosen tool of the grooming fanatic and those afraid to get their hands dirty.

With a safety razor, you get a closer shave, heightened control, and usually a good price. Perhaps best of all, you don't have to worry about accidentally slitting your throat and bleeding all over the bathroom floor. These are just some of the reasons a person might make the switch to a safety razor, and if you're doing just that, you might be a little bit confused as to what you need, h﻿﻿ow to use a s﻿﻿afety raz﻿﻿﻿or and what's the best brand to give it to you.

In this article, we're going to look at the top safety razor brands, as well as some of the best safety razors on the market, in an attempt to determine what features they posses which those not ranked are lacking.

Gillette get a lot of flack from shaving enthusiasts. Though have have produced some of the top safety razors, along with some of the best safety razor blades, many see them as a classic example of a company putting profit before art.

However, the company remains extremely popular among those who just want an affordable razor which doesn't require much maintenance. For this reason, it is no surprise Gillette rank as one of the most profitable (if not, the most profitable) manufacturers of safety razors in the world today.

With a variety of different products and a seemingly incalculable amount of celebrity spokespeople, Gillette ensure they stay in the public eye while other shaving companies are forced to promote their products almost entirely online.

While Gillette have no doubt produced some quality products, they frequently draw criticism with their sensationalism and tendency to claim each new razor is the best safety razor they have ever produced.

For nearly a century, the folks over at Merkur have been producing some of the top safety shavers on the market.

As Merkur have developed such a reputation as producers of high quality safety razors, the company currently have a waiting period of several months for each new batch of razors. While this is certainly an inconvenience, these safety razors are worth the wait.

Merkur's safety razors are a throwback to a time when everybody treated shaving as an art form. Unlike a lot of safety razors, the products Merkur put their name on are manufactured from the highest quality steel, and not plastic or rubber.

Because of the time and effort put into crafting each Merkur razor, the company's safety razors can last for years, even decades, at a time. In fact, some Merkur devotees have gone their entire adult life shaving with the same Merkur razor.

For some reason, MÜHLE likes to capitalize their name, probably to remove any doubt as to their greatness. Of course, there aren't a whole lot of people in the know who would question MÜHLE's status as producers of the best DE blades and safety razors.

Since the company's inception in 1945, MÜHLE has seen three different generations of Müller, and is currently in the hands of Hans-Jürgen Müller. Han's grandfather, O.J Müller, founded the company after returning from war captivity. This is a pretty heart-warming success story, so let's not focus on little things like just what side of the war the German-native was on.

In the decades which have passed since MÜHLE first opened their doors, they have become one of the foremost manufacturers of safety razors, producing new and bold designs while trying to stay true to their founder's vision.

This, is easier said than done, but if the safety razor reviews and sales numbers are anything to go by, the third-generation Müller is doing a bang up job. 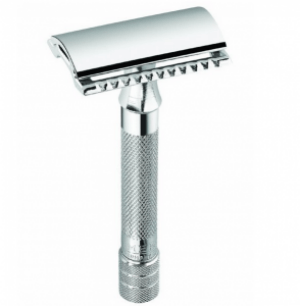 Kicking off this list of the best safety razors is the Merkur 33C. Like all products from Merkur, the 33C is a high quality razor blade, but is also affordable and a good choice if you're trying to ease yourself into wet shaving.

In various advertisements for this safety razor, Merkur claim that had it been around a century ago, it is the razor your great-grandfather would have learned to shave with. While that is disputable, it is impossible to deny the quality of the 33C.

Even the most inexperienced of shavers will have trouble cutting themselves or getting razor rash with this safety razor. If you're entering the world of shaving after years of accumulating facial hair, you will find this razor to be extremely useful in cutting through the thick growth which engulfs your face.

With thousands of satisfied customers and no shortage of positive reviews online, the Merkur 33C has earned itself an average Amazon rating of four-and-a-half stars. 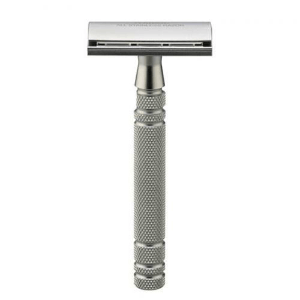 This list is going to contain a lot of these stainless steel razors. Not only do they look fancy, but they are generally manufactured by people who know exactly what they're doing, and are rarely anything but the best shaving razors available.

The Seki Edge Feather has undoubtedly earned its place in this list of the top five safety razors, and if you don't believe me, you can just look at the price. Would anybody be willing to pay that much money for a subpar razor? You can also check out the four-and-a-half star Amazon rating, along with the dozens of positive reviews left by satisfied customers.

The Seki Edge Feather safety razor offers one of the smoothest shaves you can get outside of a 1950s barber shop. When used right, it will glide across your face with ease, leaving no evidence of its work other than the fact you no longer have any facial hair.

If you're not yet ready to commit to this whole "shaving" thing, then maybe a razor of this price is not the right choice for you. That being said, if you were to shave with this razor, you probably wouldn't go back to your hairy ways any time soon. 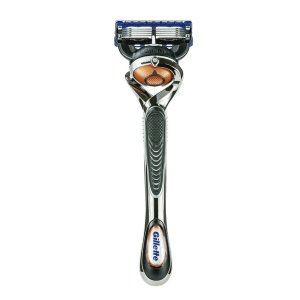 No matter how you feel about Gillette and their products, it is impossible to deny the Gillette Fusion Proglide is one of the very best safety razors available right now.

The Gillette Fusion Proglide is fitted with Gillette's FlexBall Handle Technology, which means the blade can twist and turn to reach the parts of your face which usually take a great deal of expertise to get to. On top of this, Gillette has singled this razor out as their absolute best product for sensitive skin.

While it does not have the sleek design or high price tag of some of the razors on this list, the Gillette Fusion Proglide does what it's supposed to do and it does it well. If you're looking for a razor that you can rely on during your morning shave that will surely be helpful with a shaving gel﻿﻿ and then give no thought to for the rest of the day, this is the way to go. 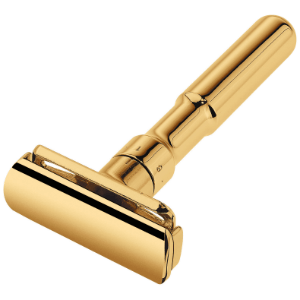 This safety razor is Merkur's second appearance on this list and is also the single coolest razor on the market. I mean, if C3-PO was powered down and sold as scrap metal, most of the robot would wind up in the Merkur Adjustable Futur.

One of the features which attracts people to this safety razor is the adjustable blade angle, which allows for Merkur's most precise shave yet.

Reviews of the Merkur Adjustable Futur have rarely had anything other than positive things to say about the safety razor. They have praised the appearance (of course), as well as the adjustable blade and durability of the razor.

This is a particularly versatile safety razor, with one Amazon customer even using this razor for shaving his head. 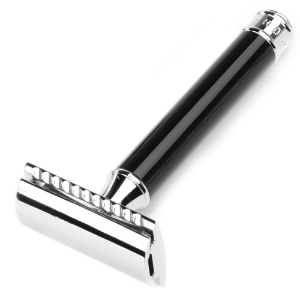 While there are a number of MÜHLE safety razors which cost quite a bit more than the R106, I have chosen this safety razor as it is one of only a few which can boast an Amazon average rating of five stars.

The MÜHLE R106 is fitted with a black resin handle to give the razor a classic feel while ensuring it is easy to grip and maneuver around your jaw. It is also equipped with a double edge blade, which promises a close shave without the fear of razor rash.

Those who have tried and subsequently loved the MÜHLE R106 have praised the craftsmanship which MÜHLE put into pretty much every product they produce. It has also been described as one of the best DE razor blades around.

If those five safety razors didn't appeal to you for whatever reason, there's no need to worry, there are plenty of razors out there that will leave you with the smooth face you desire. While we obviously don't have time to list them all in this article, we have found five more razors which have proven popular with shaving enthusiasts.

Every safety razor offers something different, so it's difficult to declare a single razor the best safety razor. However, there are certain features which may make one safety razor a better choice for you.

For example, the weight of any razor should always be taken into account. Safety razors differ in size and weight, with some being as light as a plastic di﻿﻿sposable razor﻿ to some being surprisingly difficult to hold aloft for more than a couple of seconds. If you're a larger or stronger person, you should probably go for a heavy razor, as it will be easier for you to control. Likewise, a smaller shaver should choose a lighter safety razor.

You should also consider the availability of razor blades. As a lot of brands produce safety razors which require specially designed blades, replacing your safety razor blades can be a bit of a pain. A brand like Gillette is a good choice as their razor blades are available in most drugstores. Other companies, however, only sell their blades online, meaning you may go for long periods of time shaving with a blunt razor while you await the delivery of your new blades.

In the video below, the good people over at the Grooming Lounge give a bit of extra advice on choosing the best safety razor for you.

With all the variety to choose from - not to mention all the risks of cutting yourself - switching to a safety razor can seem quite daunting, especially if you've gotten used to using a shaving brush. However, with a little bit of guidance, you will soon see that there is nothing to be worried about.

For many people, safety razors become not just their preferred method of shaving, but their passion. Some even purchase and use multiple safety razors paired with pre-shaving oils, shaving creams or shaving soaps, as they understand each razor results in a different shave.

Of course, we can't tell you which is the best safety razor for you. The best we can do is point you in the direction of some good ones and let you make the decision yourself. It may take a bit of trial and error - along with literal blood, sweat, and tears - but the right safety razor is out there.