Brainetics Review: Everything To Know Before Purchasing

Does Brainetics really work? That’s the question most parents have after watching the TV commercial for this program. Read my Brainetics review below with the actual result I got with my sons.

Even though my 9 year old twins have often been exposed to brain games & problem solving exercises at school, I didn’t feel that the teachers were doing a really good job. Apparently, my kids were still having problems with math and some other subjects, which is the reason I was on the lookout for a solution.

When I heard about the Brainetics system through a relative during our last Christmas gathering, I decided to give it a try. I can tell you that nothing I have come across had such an impact on my kids’ drive to learn more and challenge themselves. Since then, they’ve been really excited about learning math and to be honest, I couldn’t keep up with them.

No, the most important part is not the ability to solve complex computation in seconds (though that is really impressive). It’s the kids being able to do something that their peers can’t. They get a kick out of it. And the more they excel at it, the more they enjoy it, and the more confidence they get.

Did you know: The reason some kids don’t perform well at school is because they can’t compete with their classmates from the start. That intimidates them and takes out all the fun of learning.

Brainetics System was able to help my kids improve their overall attitude and self-confidence. They no longer fear school and are putting their full effort & attention into their learning. It is extremely rewarding as a parent to see your kids go through such a transition!

Table of Contents
1. How To Buy
2. Setting Expectations
3. What’s Inside the Package
4. Is Brainetics Appropriate for Kids Only?
5. Brainetics Debate
6. Is There A Brainetics Scam?
7. Winner of Parent’s Choice Gold Award
8. Cheaper Alternatives

Where To Buy Brainetics and Cheaper Alternatives 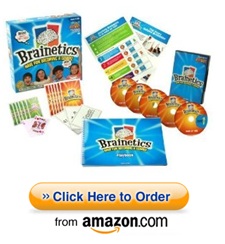 If you are still sitting on the fence about whether to buy this product because of its price tag, I can tell you that it’s worth the investment. You can go straight to their official website and buy from there, or you can actually save money on the product and on the delivery fee when ordering through Amazon.

With that being said, I know money is tight for many families, so here are similar products that can save you up to 80% of the cost and still get all the core lessons like Brainetics:

*Take note that these alternatives are both instant download material, so that you don’t have to wait for delivery and can start using them right away.

Setting Your Expectations With Brainetics 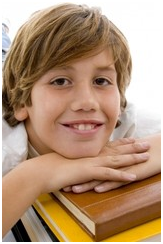 Although the Brainetics system has been very beneficial to my children, it doesn’t mean that you will get the same result. So before we get into more details of how the Brainetics actually works, you should set your expectations straight for this product:

1In the actual “parent manual” that comes with the product, it clearly states that your kid should master at least the basics of math such as addition, subtraction, and multiplication to some extent. Thus, you may want to consider whether this is suitable for your kid or not. It’s recommended for ages from 9 to 99 (we’ll get to that later).

2Secondly, this program certainly helps eliminate the intimidation of falling behind peers and boosts your child’s confidence as well as their overall performance at school. But it’s NOT a replacement for traditional learning and mathematical concepts. If you are home-schooling your child, this is even more important to keep in mind.

3Furthermore, I have seen parents who expect too much from this program. Your kid will not become a genius overnight, or go to college at 12 years old. The underlying concept by Mike Byster is to encourage brain stimulation and make learning math fun. As he said, to the kids it’s more like a game instead of a teaching lesson.

4Lastly, the mistake that parents seem to make (oddly enough) is to just throw the kid at it with little to no involvement. Like “go to your room and learn this”. It just doesn’t work that way. This program is designed for parents to get involved and connect with the child.

Bottom line, it really comes down to your best judgement. The Brainetics system is about unlocking the power and capabilities of your child’s brain. And while you think about it, keep this in mind too: it’s easier to correct any poor self-perception and attitude towards learning at younger age than later in life.

In this section of the Brainetics Review, I will cover what comes with the package delivered to your house and how the whole program works. 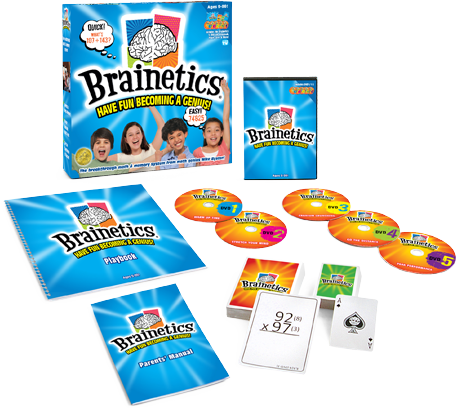 You will receive 5 DVDs, a set of flash cards and playing cards, a playbook, and a parent’s guide.

The way the Brainetics program works boils down to 3 fundamental concepts:

Is Brainetics Only For Kids?

On the Brainetics website, they claim that the program is suitable for ages 9 – 99. And I totally agree with this statement. Why, you ask?

A study showed that 35% of Brainetics users are ADULTS 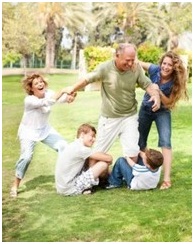 As we age, our mental aptitude begins to weaken. Keeping your mind sharp and your memory active is important to a healthy and youthful life. Brainetics helps you achieve just that. (Image: You may get grandpa to learn Brainetics too :) by freedigitalphotos.net)

With that being said, Brainetics targets children at a young age, so the program is tailored to be a little bit “childish”. It will not appeal to everybody. Well, at least I know my husband became interested in this program. He watched and learned with the kids, and he was hooked!

My two sons always wanted to re-watch the DVD with me time and time again. It has been a lot of fun not only for our kids, but the whole family.

There’s a lot of debate among parents concerning the actual benefit of math shortcuts when students are required to know all the steps involved when working out a problem. I agree that knowing the whole process is still necessary, and the longhand way is still going to be mandatory in school.

However, here’s my take on this: When I was still in school, the most frustrating part after the test was I didn’t know whether I gave the right answer until the test scores came out. And my children told me the same thing. Also, knowing the shortcuts will give kids the ability to double-check their longhand work which will save time on exams.

Don’t worry if your children have the ability to know the answer beforehand. It just gives them an advantage to check their work versus just following what they think is right and hoping for the best.

I don’t know about you, but I call it having a “competitive edge“, which is not only helpful during my kids’ primary school life, but also into adulthood. That’s why I stated earlier that the real benefit is the improved self-esteem and learning mentality I’ve seen in my children.

Is There A Brainetics Scam?

I was surprised to find out that there’s quite a few Google searches related to Brainetics Scam. So is there such a thing? Fortunately, the answer is NO. There are two reasons why the keyword Brainetics Scam shows up:

1. It’s a way for consumers to check if this product is associated with any scam, and if it is worth their time to look any further into the product. It’s quite smart to check for complaints about a product such as Brainetics before purchasing.

2. Putting the word Scam following a product in a website’s URL and title is a spammy way for webmasters to attract the attention of reader.

Parents’ Choice Award organization was established in 1978. Its mission is to help parents make informed decisions about which products are suitable for children.

Only the best material is honored by this program. Brainetics won the Gold award in 2008 for A Breakthrough Math and Memory Program.

In addition to that, Brainetics has received countless testimonials from users, as well as praise from teachers and educators around the country. Mike Byster has been invited to many different schools to teach students the Brainetics method.

If you ask me, this program is worth every penny of my investment, and I never regret investing my children’s future.

You also can check out several cheaper alternatives if you believe the price does not justify the purchase. These two products teach the same core concept as Brainetics at a much cheaper price. They’re available via instant download, so your kids can start learning right away: